This May marks the two year anniversary of the beginning of our journey into modern board gaming, so I thought it would be nice to take a little look at the evolution of our board game collection over the past couple of years and see where it all started!

Before May 2015 we had a few games, Monopoly and Risk for example (although they were of course the Walking Dead versions!), Cards Against Humanity was our go to party game and I played games like Hero Quest as a child, but still we knew very little of the modern board games that existed. Then Daniel happened upon The Walking Dead: The Best Defence and we got our first taste of co-operative board games… A few months later, we got A Game of Thrones: The Board Game for Christmas but still I wasn’t exactly hooked, although always happy to play games.

And so it begins…

May 2015 – After a little research into co-op games, Daniel bought me Forbidden Island and Pandemic for my birthday. Now, I’ll admit that while I did enjoy The Walking Dead: The Best Defence for it’s co-op factor in comparison to games like Monopoly, I didn’t feel like board games were really MY thing so I was a little confused that Daniel would buy them for me as they seemed more like a present for him than for me… Well it turns out that the man knows me better than I know myself because I fell in LOVE with Pandemic and in turn modern board gaming!

August 2015 – We bought a cheap little table from Ikea and turned our dining room into something of a gaming/storage room. I think at this point we were at around 25 games… we had added a couple more co-op games (Flash Point, Ghost Stories and Pandemic: On the Brink), some party games (One night Ultimate Werewolf, Cash ‘n’ Guns, Bang the Dice Game and Skull) and ventured into deck building with Star Realms followed closely by Dominion… Deck builders soon became my second love after co-op’s! 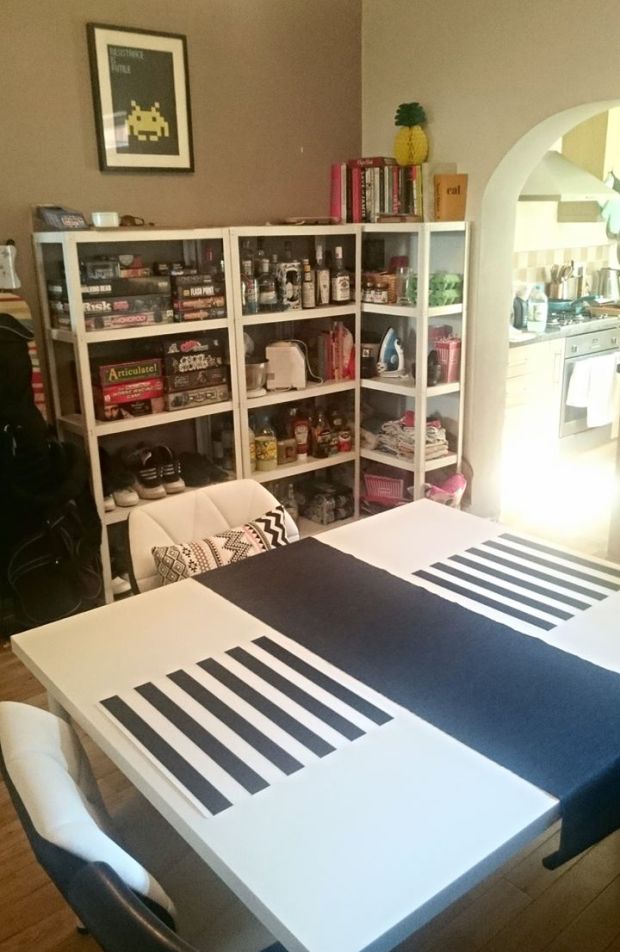 October 2015 – After a couple more months and Daniel’s birthday haul we had built up a nice collection, with a good mixture of games… I think we we’re probably at around 50 games by this point judging by this photo.

February 2016 – After the Christmas haul things had escalated slightly… we had exactly 99 games here (including expansions).

May 2016 – One year in and it was time to update our shelving! With none other than the Kallax of course. This was a fun day, just look at all that space waiting to be filled up… we had so much room we even managed to have front facing game boxes, so much potential! I’m estimating we had 110-120 games here…

November 2016 – Well we soon filled up all that potential… Scythe and The Others showed up and took up a lot of room! So we added a couple of small units on top for smaller games and some of the older games got moved to a secondary location. I think we were somewhere between 180 – 200 including expansions at this point!

January 2017 – After Christmas we really started running out of space so we made a few new years resolutions to try to keep our collection under control! We even started trading on Board Game Geek in the UK Math Trade!

May 2017 – Exactly two years later and we are definitely at breaking point… but in a good way!

And finally here’s the shelf of shame! Well, not really shame… Hero Quest simply doesn’t fit on the main shelves, some are on here for the ‘To Trade’ pile or as empty expansion boxes.

We’ve also got a small crate of little games and print and plays that don’t fit on the main shelf.

I hope you enjoyed this little trip down memory lane! I’m going to try to update this on a yearly basis to see how our collection evolves. We have a lot of Kickstarters due this year so we may need to add more storage at some point!

*Originally published by me on the Board Game Caddie Facebook page