This is often the first hurdle that people struggle to over come. I’d been wanting to play D&D for years, Daniel even bought me the 5e Starter Set a few years back but I was convinced I wouldn’t be able to find anyone to play it with me.

Earlier this year I decided to start asking around to a few friends and family and to my surprise it wasn’t too difficult to persuade most of them to join me. And now that we’ve started I’ve had even more people ask if they can play too! I really wish I’d just come out and asked a couple of years back… if you don’t ask, you don’t get!

A great introduction is getting them to watch/listen to some Critical Role or other D&D show/podcast. Although make sure you manage expectations by making it clear that those players/Dungeon Master’s are professional D&D players and actors who have been playing for many years! 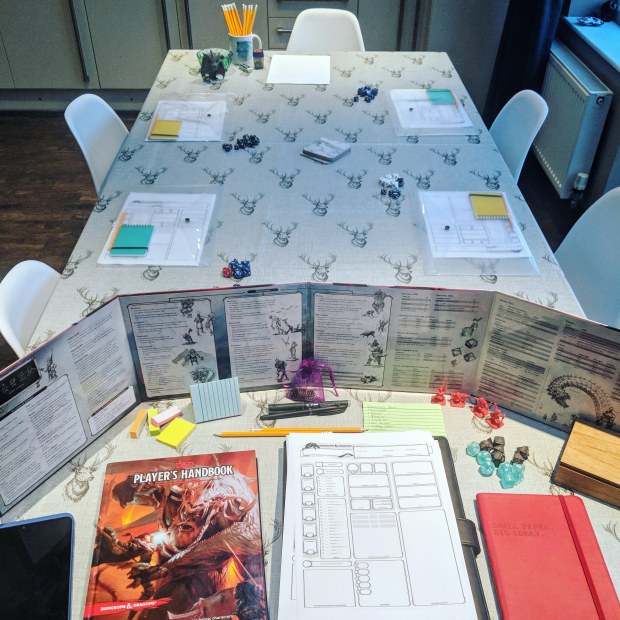 An empty table isn’t so fun…

If you really don’t have anyone in your immediate circle willing to give it a go, check your local gaming stores for D&D groups, or you can even play online using sites like Roll20, Skype or Discord.

Be Clear with Expectations

If your friends and family have never played D&D and know very little about it, make it as easy as you can for them to say yes! When I sent messages out to people I set clear parameters and expectations on time commitments etc. so they knew what it would involve.

The message I sent around:

Would you guys have any interest in taking part in a Dungeons and Dragons campaign? It’s something I’ve been wanting to do for a while so thought I would test the waters and see if anyone else is interested! Don’t feel like you have to say yes as it is quite a commitment, but I’m hoping it’ll be lots of fun! The starter campaign I would be using would take approximately 4-6 sessions at around 3-4 hours at a time. Sessions would be either fortnightly or monthly depending on the preference/schedule of those interested. Obviously if you played and hated it we could kill you off so you’re not tied in or anything! 😉

We are now 10 sessions into the starter campaign so it’s taking a fair bit longer than Reddit advised, but everyone is still loving it! If they didn’t like it so much the campaign would have probably finished by now but my players enjoy completing all the small quests as well rather than trying to skip straight to the big boss, which is a good sign!

In the rest of this article DM refers to Dungeon Master and PC refers to Player Characters.

You only need a handful of people to play D&D. In fact, it’s much easier to manage a smaller group in terms of scheduling and makes gameplay more involved for each player. If you have 3 PCs and a DM, those players won’t be waiting as long between turns compared to 7 PCs!

It’s even possible to play with just 2 PCs or even just 1 PC and a DM if you’re really struggling to find players. Although I would advise at these numbers that the DM also plays a PC, often referred to as a DMPC to increase the party size. Ideally though you’ll want to aim for somewhere between 3-5 PCs plus the DM.

And remember, players may drop out! I went from 5 PCs to 4 after the first session… Try not to take it personally, a player dropping out is preferable to having a player at the table who doesn’t really want to be there!

You may have to DM

Finding a DM is a whole other ball game and if you don’t know anyone who already plays, you may have to be the one to take up the mantle. But I’ll let you in on a secret… It’s the best part of D&D!! OK, so I’ve never been a player but I feel pretty confident I’m happier in the DM seat. In one session I played a Druid, Goblin, Twig Blight, Cultist, Giant Spider and a Dragon! Why would I want to be just one character?!

And if I can do it, anyone can! You don’t have to be Matt Mercer, you just have to be willing to put in a little work for a big pay off.

You may even find that once your players have got their heads around the game, one of them might decide they would like to give DMing a go, allowing you to try out being a PC!

The next post in this series will take a look at how to teach the basics without overwhelming your players.

If there’s anything you’d like me to cover in this series please let me know in the comments!