What I played last week

Monday | 2 players – We tried Total Rickall for the first time on Monday and we really struggled! I think we were really unlucky with our cards but I also thought it seemed really unbalanced with 2 players. We had all the wrong action cards in hand that didn’t match the colours of the character cards so our only options most of the time was to shoot blindly or play cards that had no effect and a lot of the characters were Real really early on!

Wednesday | 4 players – Not ones to give up on a game after one play, we brought Total Rickall along to Wednesday game night to try as a 4 player and it was sooo much better! We managed to clear parasites quicker than they were coming out and got to a point where we were confident that all 4 characters out on the table were real, so we won!

I’d like to go back to 2 players and see if we were just really unlucky the first time we played it! It certainly is a trickier game that we first thought it would be. And the advanced mode intrigues me, so once we’ve gotten bored of the standard game I think we’ll definitely try that!

Wednesday | 4 players – To say it’s been a while since we played Splendor would be an understatement… I checked my plays on BGG and it’s been nearly 2 years!!

We had previously played it a few times as a 2 player then put it back on the shelf to gather dust, so last week we dusted it off to try as a 4 player. I’d forgotten what a solid game this is, very simple gameplay but high in strategy.

Simon and Riva really enjoyed the game so we left it with them until next game night to try as a 2 player so I imagine this will become a regular at game night!

Wednesday | 4 players – Shortly after this photo was taken, Red got knocked out below ground and Yellow (me!) took the victory as the only conscious adventurer! It was a brutal game!

This was our first time trying the game with 4, I was worried it would be a little slow as deck-builders can drag a little, but once everyone knew what they were doing, it wasn’t too bad at all. I think the risk of Clank keeps you engaged outside of your own turn which helps.

Another game night staple I think! We have the Sunken Treasures expansion to add in which I think we’ll do next time to mix things up a bit! Although I have no idea what it entails as we just bought it when we bought the base game without having played either. It’s possible we have a problem.

Friday | 2 players – Friday night we thought we would get cracking on our 10×10 challenge so we thought we would see how Flatline played with 2 people, having previously only played it once at 4 players. Turns out it was a mute point as we were playing it completely wrong…

We realised after playing that we got a rule regarding the emergencies wrong, we thought you could only clear the ones that were active. Then after posting this photo on Instagram I was informed we also got the ‘no more that two rows of emergencies’ rule wrong too… Basically we made the game way harder than it needed to be!

Saturday | 2 players – After the embarrassment of Friday night we left the game out on the table to have another go Saturday, this time with the correct rules. And what do you know, it was so much easier and we even won! We only played it on training and it was still down to the last round so we need to up our game for next time when we play standard.

Saturday | 2 players – Continuing on with our 10×10 challenge, we decided to play a couple games of Hero Realms. Daniel backed this on Kickstarter as my Christmas present back in 2016 but the campaign and boss decks didn’t arrive until late into 2017 and with the house move and everything we completely forgot about it!

I wanted a deck builder in our 10×10 as they are my favourite kind of game, so we decided on Hero Realms as we have so many add-ons to explore, we won’t get bored of it within 10 plays! And we can play it competitively and as a co-op, win win!

We got two games ticked off, I won the first game and Daniel won the second one. 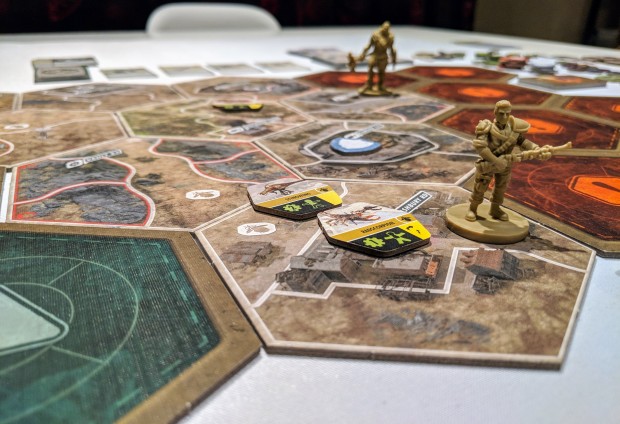 Sunday | 2 players – Sunday evening we decided to have our first try at Fallout. At first I really struggled to enjoy this game. It felt like I was getting nowhere for a very long time! Then all at once I was close to winning with my agenda cards but within moments that hope was dashed as one of the two factions won with full power. It was so sudden.

I think I’m gunna reserve judgement until I’ve had another play of this as it definitely got better, but I didn’t love it straight off the bat. It’s a tough one for sure!

What I bought last week

As we are still building up our credits (if you didn’t catch my New Year Resolution post, you can find it here) we haven’t made any purchases yet this year. Unless you count Kickstarter… but we don’t count Kickstarter projects as part of our board game budget (I know… cheating!) so here’s what we backed this week!

Spirits of the Forest

“In Spirits of the Forest, players represent the four elements that nourish the forces of nature. Up to four players compete to acquire the most spirit symbols, as they score nature points for having the majority of each spirit. The winner is the player with the most nature points at the end of the game.” – Kickstarter

This game is BEAUTIFUL! We backed just the retail pledge as it seemed to be such great value at just £16 delivered, but I am already wishing we got the deluxe version because it is just stunning. The component quality looks like its going to be great either way though and it has been killing it on the stretch goals so I’m excited to see where it ends up in 10 days when the Kickstarter ends!